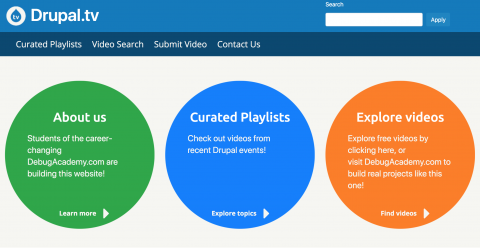 When I’m recording an event, there are several recurring threads in conversation when chatting with attendees:

Thoughts of that last one started way back at DrupalCon Austin, when we were hoping to get camp videos added to the DrupalCon YouTube channel. Since then, it has come up frequently as the momentum has been building. The fact that Drupal.tv now exists and has more than 3,500 videos is still hard to fathom.

Granted, at the time I added content discoverability as a goal to the (unofficial) Drupal Recording Initiative, I already knew that Ashraf Abed (@ashabed) and his Debug Academy (@DebugAcademy) students were working on a site. Pessimist that I am, I had seen prior attempts at a solution stall out, so I was reservedly optimistic. But as Ashraf kept sending me updates, the anticipation grew. At that time it was Drupal.tube, so when he let me know that he would be launching on New Years Day at Drupal.tv, I was blown away.

Prior to launch, Ashraf asked me for a list of playlists that I’ve recorded (which I happened to randomly have because Dwayne McDaniel (@McDwayne) asked me back in November if a list existed, and at the time it hadn’t, so I created it) and also invited me to load some playlists. I figured I’d upload a couple, but by the time I went to add one, they had already been uploaded. I knew that MidCamp’s YouTube also lists other camp channels, so I went there to upload one and test it out. It was so fast and easy that I ended up adding all of DrupalCamp Atlanta’s events (11), NERD Summit (3), and Bristol 2017 (1).

Rachel Lawson (@rachel_norfolk) mentioned on twitter that this should be added as a project on Drupal.org and I really support that idea. This will allow for documentation and credit, but also the issue queue so I’ll have a place to submit feature requests!

Here are just a few:

If you run a Drupal event, check for your event in the list of curated playlists. If you don’t see yours listed, fill out the contact form to get your videos added.

Oh right! And from now on, when people ask where they can find the videos, my answer will be Drupal.tv! The community now has an incredible resource. And it’s up to the community to keep that resource strong.